Check for Plagiarism in Assignment Before Academic Submission

What does it mean to check for plagiarism? It is defined as presenting someone else’s words or ideas as one’s own with attribution or giving due credit to the original author. According to official statistics more than 45,000 students have been caught cheating at Britain’s universities. Even with the computerised tools to check for plagiarism, scholars are still finding new and ground-breaking technologies to beat the system. Educators say they are fighting a losing battle. Most institutes accept zero plagiarism as a standard requirement for the assignment help. But there is no conceived predetermined or stipulated actual plagiarism acceptance percentage which is agreed upon by all the institutes. 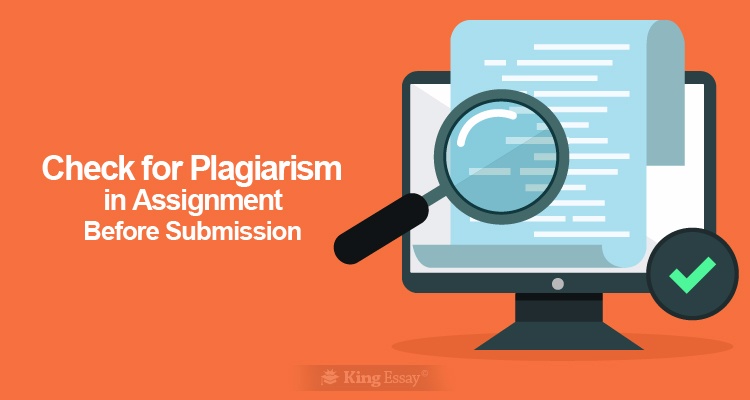 The case is no better with the teachers teaching their scholars. Some educators have admitted that their school is teaching students to plagiarise. They are unable to implement the basic academic standard morals required to achieve a productive learning environment. Institutes often clarify that they check plagiarism online for every word of each assignment being submitted but still this epidemic is becoming more and more common. Educators argue that technology is changing rapidly and with these advancements a copied work is becoming harder and harder to detect. Since both the learners and the educators have access to these contemporary technologies.

Lecturers argue that there are various systemic problems as well in classrooms with too many students being put in a single course. Conducting tests and implementing principles and codes of conduct during the testing sessions is becoming increasingly difficult with these large numbers of pupils. Other than the problem of how to check plagiarism, educators face technical difficulties as well. Another example of this is, how to determine if a given programming assignment help delivered is plagiarised or not. Computer software is designed to compile programs and not to determine if it is duplicated. Then there are companies like King Essays which guarantee to deliver academic undertakings which are not plagiarised.

In their defence, learners say that they are being assigned far too many responsibilities all at once by their institute. From choosing a dissertation title to sitting for the examinations and meeting deadlines, learners are beginning to feel the strain. There is too much undue pressure on pupils to compete against each other to succeed to achieve the final qualifications. They are well of the guidelines which they need to follow but time is of the essence. Scholars no longer have the privilege of excess time. They argue that the services which they are paying for are not being delivered to the established regulations which they have come to expect. Being expected to hand in five to seven papers each year, they can’t exactly be expected to start working on each one from the beginning.

Pupils maintain that most of the times they have not received the proper guidance from their institute to teach them exactly how not to plagiarise in their works. Sometimes it may be inadvertent and not intentionally appropriated. Their lecturers have time to teach the main crux of the field of study but they do not have the time to teach the conventions and the formal practices used to eliminate duplication.

Compounded with the disorientation of all the different referencing techniques which need to be used to produce an original work undergraduates often face a dilemma when to use which one. Their troubles aren’t over when they learn a single referencing method since different subjects will use different practices. They must learn every single skill depending on the different fields of their study.

The fundamental solution lies in both the universities and undergraduates finding a common ground which they can both agree upon. Universities need to facilitate disciples to understand the standards and each student needs to be more conscientious of their actions.